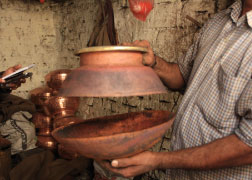 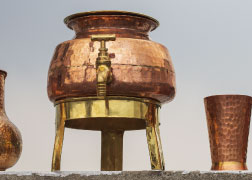 Indian handicrafts Diverse, complex & colourful well this one is healthy too !!

To write about Indian handicrafts is almost like writing about the country itself. So diverse, complex and colourful, and yet with abundance of simplicity and charm. Since time immemorial, Indian crafts served as an integral part of culture and custom of rural and tribal communities. The historically imbibed plural aesthetics of Indian handicrafts are priceless economic and cultural assets of the country. However, with the onslaught of fast-paced mass-scale production methods, survival of the traditional arts and handicrafts are at stake. Due to this, artisans are moving to alternative income generation methods, for instance, daily wage labour and farming; and art is losing its grip. 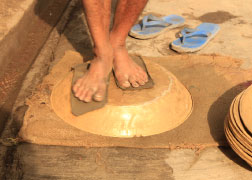 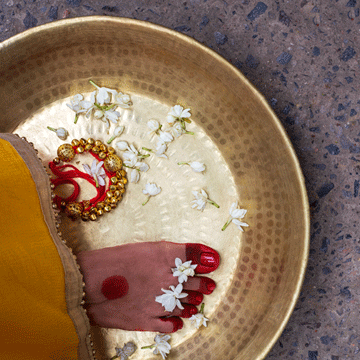 Give Traditional products new utility, or maybe let people know about the existing utilities of the product.

The handicraft sector carries the stigma of inferiority and backwardness, and is viewed as decorative, peripheral and elitist, with the advent of industrialisation. The main challenges that artisans face in creating sustainable livelihoods today, range from issues of low productivity and inadequate demand chain to problems of exploitation at the hands of middlemen. Traditional crafts have largely been marginalised by mass-produced machine-made consumer goods, which tend to be cheaper due to the economies of scale associated with mechanisation. Catering to the mainstream market often necessitates a decline in quality and workmanship, leading to the eventual loss of skills over a few generations. There is a growing need to revive Indian Handicrafts more than ever.

Start spreading awareness about the craft & its benefits.

Start creating your niche, could be through social media or through your social circle.

140 years ago, ‘Thak Thak’ the sound of the Thatheras’ hammers striking the lustrous brass was all that echoed the walls of Jandiala Guru, a craftsmen’s village near Amritsar. Alas, these soundwaves lessened as the number of families practising the Thathera art form fell from 500 in 1880’s to a mere 30 today. The fat brass patilis and parats that once adorned the palace of Maharaja Ranjit Singh retained their charm even in the 21st century but lost the market for them. The craft ceased to exist with the younger generations of Jandiala moved to the towns and the thatheras practising this pristine craft shattered gradually and that was when the ‘Thak Thak’ became rarer than ever.

“Who will buy our paraats and patilis in the modern day market?”

A forlorn thathera once asked, “Who will buy our parats and patilis in the modern day market?” P-TAL has answered his question! Our team set out to revive the Thathera craft, the only artform from India to be listed under UNESCO’s List of Intangible Cultural Heritage. We institutionalised the thatheras under an SHG and with the help of our team of designers, our thatheras are producing contemporary designs to suit the modern markets around the world, and gave existing products the utility. We through social media set on to a journey to spread awareness about the craft & its health benefits.

The youth of Jandiala have returned back to their legacy from their hideout in towns. Today, the walls of Jandiala echo the ‘Thak Thak’ all the more stronger. We have got more lives to change and more stones to turn. P-TAL, the one which relishes the true spirit of craftsmanship.